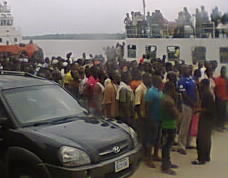 A vessel, the Emiliana Caneiro from Gabon, yesterday afternoon, Monday,June 22, 2015 berthed at the Calabar Inland Waterways jetty with close to one thousand illegal immigrants; men, women and children, arrested and deported to Nigeria from Gabon, www.calitown.com can authoritatively reveal.

The illegal immigrants from the West African countries of Nigeria, Mali, Senegal, Burkina Faso and Cote D’Ivoire, are said to have been
arrested by Gabonese security agents and sent to Calabar. It was also
gathered that some of the Nigerians among them were arrested at sea when the captain of the vessel illegally transporting them to Gabon,
abandoned ship at sea and fled, leaving the immigrants to God’s mercy. The vessel and cargo drifted and were later arrested at sea by
Gabonese officials.

On arrival in Calabar, the immigrants of Nigerian origin, mostly of
Ibo extraction were separated from the lot and allowed into the country while other immigrants were barred from alighting. Sources at
the jetty who spoke on condition of anonymity with www.calitown.com
maintain that, “our corrupt Customs and Immigration officials in very
high places have worked with shipping agents to send this human cargo
to Calabar. You can see that they are not even documenting these
people, they are counting them and will load them in buses to discharge in (sic) several parts of this country; it has security
implications that they are not bothered about”, one source said.

Some of the young men on the vessel had eyes set on traveling to
Europe before their plans were botched, while a source on the vessel confided in www.calitown.com that some of the teenage girls on board were part of a prostitution ring. Another visibly angry source said, “the Calabar jetty is good for this unfortunate cargo which adds no economic value to this state, government officials don’t even know about the kind of filthy things going on here, it is unfortunate”. Several security agents on the ground are thought to have been compromised and did not seem interested in properly scrutinizing the immigrants before loading them into several luxurious buses and sent to wherever, late Monday night.